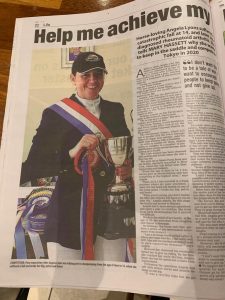 ANGELA Lyons laughs a lot. She laughs the loudest when asked if she ever considered giving up horse riding after suffering a catastrophic fall from a pony, followed later by a diagnosis of rheumatoid arthritis. “Giving up never entered my mind,” says the Tower woman. “It was always a case of how was I going to get back to horse riding. “I could never see myself without horses in my life. Angela, who has the distinction of being Cork and Munster’s only para equestrian rider, is hoping that local people and local businesses will get behind her fund-raising efforts as she sets out on a quest to qualify for and compete in the Tokyo Paralympic Games in 2020. Helping Angela on her Paralympic quest is her husband, Steve Lyons. “We’re very much a team,” she says. “I couldn’t do it without him. “My horse, Tommy, is very boisterous and Steve looks after him at all the shows as I couldn’t manage Tommy on the ground.”
The Paralympic Games, which will run in parallel with the Tokyo Olympic Games in Japan next summer, cater for world class athletes with a disability. In order to qualify for them, Angela needs to compete in a number of prequalification events across Europe, each costing up to €2,000.

The Cork woman has been obsessed with ponies and horses since she was a five year old. She grew up on Model Farm Road and the family regularly travelled to West Cork, where her late father kept Shetland ponies and donkeys. “From the age of nine to 14, I was taking part in showjumping and was competing at the highest level,” says Angela. “Then, at 14, I was involved in a freak accident where my pony stumbled. I went over her head and landed on one of the jump poles. I broke my hip, pelvis and femur.

“When you’re young, you don’t realise the effect the injuries will have on you in later life,” Angela admits. By this stage the family had moved to Blarney. Angela had to have several operations and spent a year on crutches. She tried to go back showjumping but it proved too difficult. Much to the relief of her family, at the age of 18, she switched from jumping over fences to dressage. In dressage, the horse and rider perform a series of pre-determined movements from memory. “I got a dressage horse called Latino J, whose pet name was Rio. I did really well with him and we reached advanced level in para-equestrian dressage,” says Angela. However her shattered hip eventually forced her to give up riding. By the time she reached her early thirties, Angela knew she had no option but to have a hip replacement. Following the operation Angela was left with severe nerve and muscle damage in one leg. “It was a terrible time but we got through it,” she says. “I kept a picture of Rio by my bed. I couldn’t get out to see him as I couldn’t stand on the leg as it was in such bad shape. There was also a danger I would fall over as I was on so many painkillers. “For a few years, I couldn’t get up on a horse at all. After that, I started sitting up on the back of an old horse for two minutes and that kept me going, even though everyone was freaking out when they saw me!” Through sheer grit and determination, Angela pushed herself to get back riding. She looked set to compete in the 2012 Paralympic Games in London but it was not to be. “I knew something was wrong but I didn’t know what it was,” she recalls. “This pain was totally different because it was all over. The fatigue was so bad that I would have to crawl up the stairs because my knees were so bad.” That was when Angela was diagnosed with rheumatoid arthritis, a condition that makes the joints in your body become inflamed, resulting in pain and stiffness. “Some of the treatment was chemotherapy based and you could be sick for four days of the week,” said Angela.

“I said I wanted to stay as active as possible and now I inject myself with my medications once a week and that’s keeping it under control. I also have to take painkillers daily,” Angela explains. Some days, she struggles to get across the stable yard at her home in Tower, but other days it’s full steam ahead with her preparations for Tokyo. “My horses, Rio and Tommy, don’t care how you’re feeling. They just want you to get up there and look after them. They’re great therapy for me.” Woodcroft Santa Cruz is Tommy’s official title. Angela gave him his pet name as a nod to Tom Cruise. She still has a soft spot for Rio who is now retired. “Rio was more mindful of the slightly battered rider he had on board”, Angela laughs. Fundraising is a vital aspect of Angela’s preparations for the Paralympics Games next year. However, she is also hoping that her story will encourage other people with disabilities to get involved in Paralympic events.

As the demand for alcohol gel and hand sanitiser is at unprecedentedly high levels, and we understand that there are lots of people and businesses…
READ MORE

Mervue Laboratories proud to be on call for Ireland