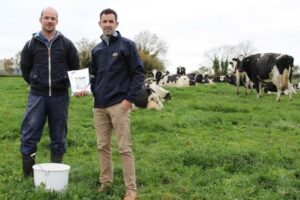 Dairy Farmer Michael Nolan farms 110 Holstein cows in Co Carlow, Ireland.  On farm Michael runs a high yielding herd producing over 700kg of milk solids per year. Michael calves down 40% in Autumn and a further 60% in Spring as he is in winter milk.

Running a high yielding herd of Holstein cows requires a lot of care and attention. A great amount of importance is placed on the cow and their nutrition. It is vital that the nutrition that is lost through the calving process is replaced immediately after calving. Michael has learnt from first-hand experience that if the minerals are not adequately replaced after calving everything can be affected from the immune system to the fertility of the cow.

Liam Lacey from Mervue Laboratories and Inform Nutrition met with Michael Nolan recently to discuss his use of First Drink.  Michael has been using First Drink on farm for a few years and is really happy with the results. “It definitely hydrates the cows, gets them cleaned quicker and they just hit the ground running.” Michael gives First Drink to most of his cows immediately after calving as he finds it revitalises the cows, replaces some of the lost fluids during parturition and sees a much smoother transition post calving. He is extremely happy with the results from using First Drink and finds the powder easy to mix and very palatable.

First Drink, which has been developed and formulated specifically to address the nutritional need of the transition cow supports early recovery from calving, increases the metabolism of Ketones and supports the prevention of Ketosis in a super soluble powder.

Liam Lacey added “Like many First Drink customers, Michael has been using First Drink for a few years and is satisfied with the results that he has received. Michael religiously gives First Drink to cows for faster recovery.”