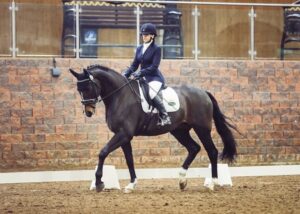 Angela is a full-time rider Para-Equestrian Dressage rider based in Blarney, Co. Cork. Angela competes at Grade IV level. She has been riding since she was very young and competed in ponies at an international level. A fall at the age of 15 resulted in a shattered hip and pelvis and, as a safer option, she then turned to dressage. She first got involved in the para movement in 2009.

2010 was Angela’s first year on the international para-equestrian stage, but at home, she is a multiple national champion. As a member of the high-performance squad, she travelled to Moorsele where she placed in the top-10 on each outing. She also went to Hartpury and finished second and fourth on Latino J. More recently she was at Deauville with Rizaro and a member of the third-placed team. At Hartpury she achieved two fifths and a fourth with Latino J.